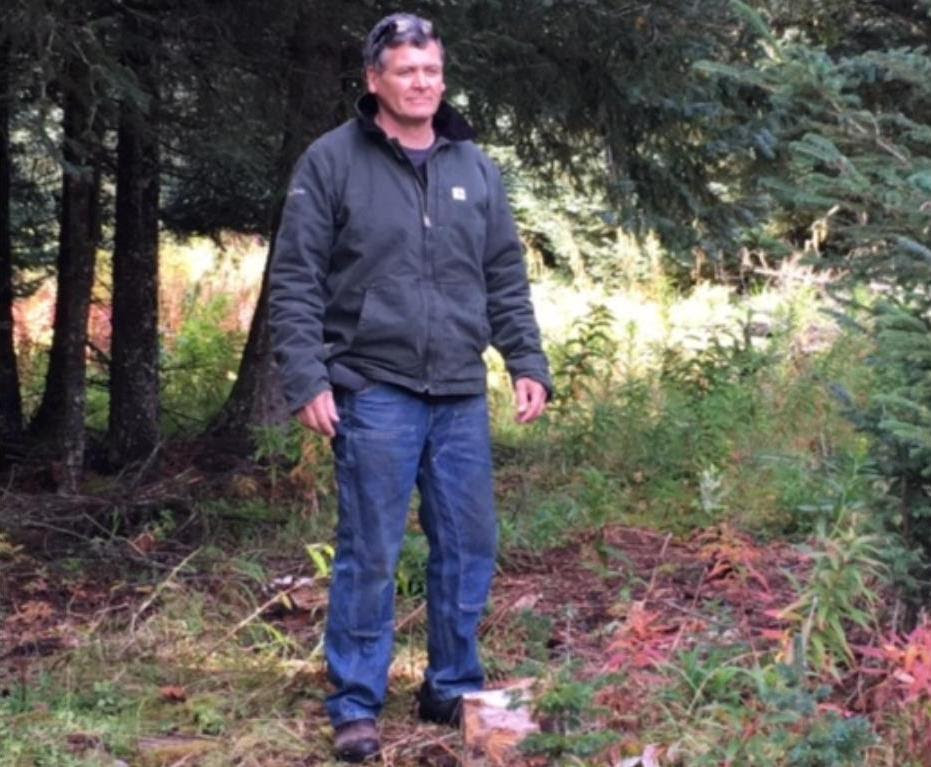 Kim Woodman, dressed as he was when attacked by the brown bear on Humpy Creek (courtesy Kim Woodman)

Kim had a Glock model 20 10 mm pistol with him.  He was able to stop the attack by shooting the bear as it charged at him.  While backing away from the charging bear, Kim tripped and fell backward.  He instinctively attempted to fend off the bear with his foot, while he concentrated on firing the shots that saved his life.  The last shot was just short of contact.  It probably hit the bear in the chest, but also took off the tip of one of Kim's toes.

Kim Woodman was kind enough to grant me an interview.

On Friday, the 29th of July, Kim impulsively decided to take a day hike up Humpy creek.  He did not expect trouble.  Almost as an afterthought, he put the Glock model 20 10mm pistol and a box of ammunition in his day pack.


I was just moving up Humpy crick there, I had just thrown the gun in my pack.

I saw bear scat, so I loaded the gun, with 15 rounds in the magazine, none in the chamber.  That is the way I grew up and was taught by my dad.

I put the pistol in my pants pocket.

Kim was born in Alaska. He is 57 years old. His father homesteaded in the state in 1938, and was one of the first bear guides there. Kim has spent nearly all his life in Alaska, with a few winters spent in Nevada going to high school. Kim is very familiar with bears and how to deal with them.  He has encountered many bears on a lot of creeks. From Kim:


I have been in that situation a lot, you are going up a creek, you see a bear, you back up.

Generally you can back out, and the bear will just slink off.

Kim did not want to shoot the bear.  But even more, he did not want to be mauled 4 1/2 miles from his skiff in dense woods and rough terrain.  He had hiked up Humpy creek instead of following the trail. As Kim puts it:

It was about 4 1/2 mile out from my skiff.  I had just downloaded an app to show topographic details.  I used that to find the trail for heading back out. It was very thick.  I did not want to fight the brush on the way back.

There was no cell phone connection.

Kim was making some noise as he went up the creek.  The cover was very thick. There were plenty of mosquitoes:


There wasn't a lot of noise, and I was not making a lot of noise.  I was busting through brush and mosquitoes and sweat.  It was a pretty ugly mosquito year.

It was just another creek with some bear sign, and the chance of meeting a bear.

You think it isn't going to happen until it does.  So it is best to be prepared.


Kim instinctively attempted to back away, but the sow was having none of it. The cubs saw Kim just as he saw them, from about 30 feet away, across a little opening in the dense woods.


I am moving up this really thick stuff, too much fallen over the creek itself to go up it. There was a deep hole in Humpy creek, and the bears were in the hole.

The cubs and I saw each other first, across about a 30 foot opening. The cubs went scampering off and the sow saw me and came straight at me.

She had to come up a little bit of bank, that gave me a little extra time to make sure I chambered a round. I was shouting at her when I realized that I had to shoot. I let about three go, and then she was right on top of me.

That is when I tripped backward and she was right up on me when I let go with the last round that took the tip of my toe off.

Even if she had only got me for a few seconds, I do not know if I would have been able to crawl out.

Kim's description of how he perceived the situation is pretty common for deadly force events:


Hooked my heel on  something while backing up and firing.  Thick alders and brush.

It wasn't even like I was falling.  There was tunnel vision, concentrating on the shot.

I instinctively put my foot up at the same time, and snapping a shot off.

Kim said that there wasn't any real choice.  The sow was totally committed.  She had made the decision to attack, and was in a full out charge. Kim said that he clearly remembers shooting two handed.

The whole situation only took about 4 seconds.  The final shot was very close.  Park Ranger Jason Okuly found Kim's sunglasses at the scene.  They had fallen off the top of Kim's head as he fell backward.

Okuly said that the sunglasses were only two feet from the bear's head.  He also retrieved two empty cases and returned them to Kim.  He told Kim that they noticed at least three hits.  One in the left eye, one in the mouth, and one in the chest.  They did not look too closely because the carcass was bloated and stinking pretty badly by the time they were able to reach it.

The sow was eight years old, and about 400 lbs.

It wasn't until the action had stopped that Kim noticed that he had hit his own foot while shooting at the bear.  He saw blood coming out of his boot.


Everything happened so fast, 4 seconds, and you are standing there with a dead sow, and I see blood coming out of my boot. 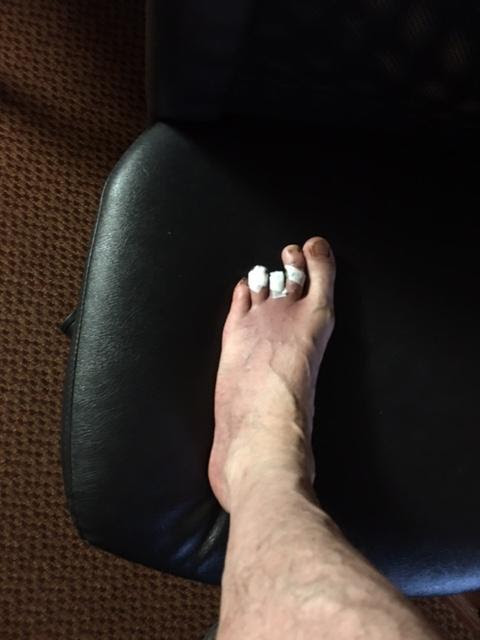 Kim chose to walk out immediately, before the adrenaline rush from the defensive shooting wore off.  On the way out, his leg started to cramp up. That is when he made the video of his booted foot with the hole in it, on his iphone.

Once he got back to the skiff, he had a 12 mile ride back to Homer.  He tied up the skiff at the 160 foot landing craft that is parked there, walked to his truck, and drove to the emergency room. 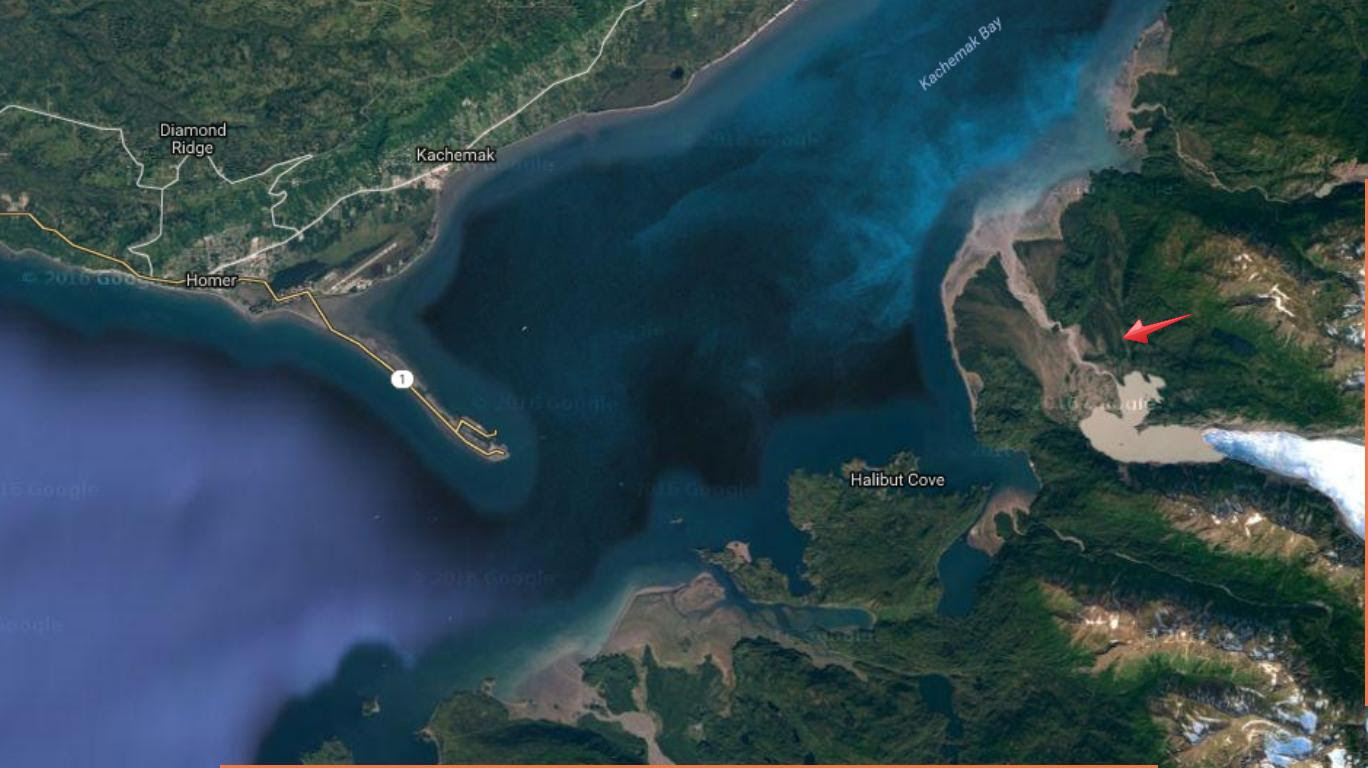 The red arrow shows the approximate location of the shooting.  Satellite photo from Google maps.

Kim chose the Glock because he liked how light and tough it was.  He had two revolvers before the Glock, a Ruger stainless .357 and a Colt Anaconda .44 magnum.

When he learned how much the Anaconda was worth (it is a fairly rare, collectible revolver) he sold the Colt. He said that because he spent a lot of time on salt water, he knew the Anaconda would get beat up and lose considerable value. A few years later he picked up the Glock.

The ammunition that he was using was the HPR 10mm 180 grain JHP ammunition made in Payson, Arizona.  The velocity claimed is 1270 fps, for 650 foot pounds of energy. Kim says he expects to get some Buffalo Bore cartridges in the future. 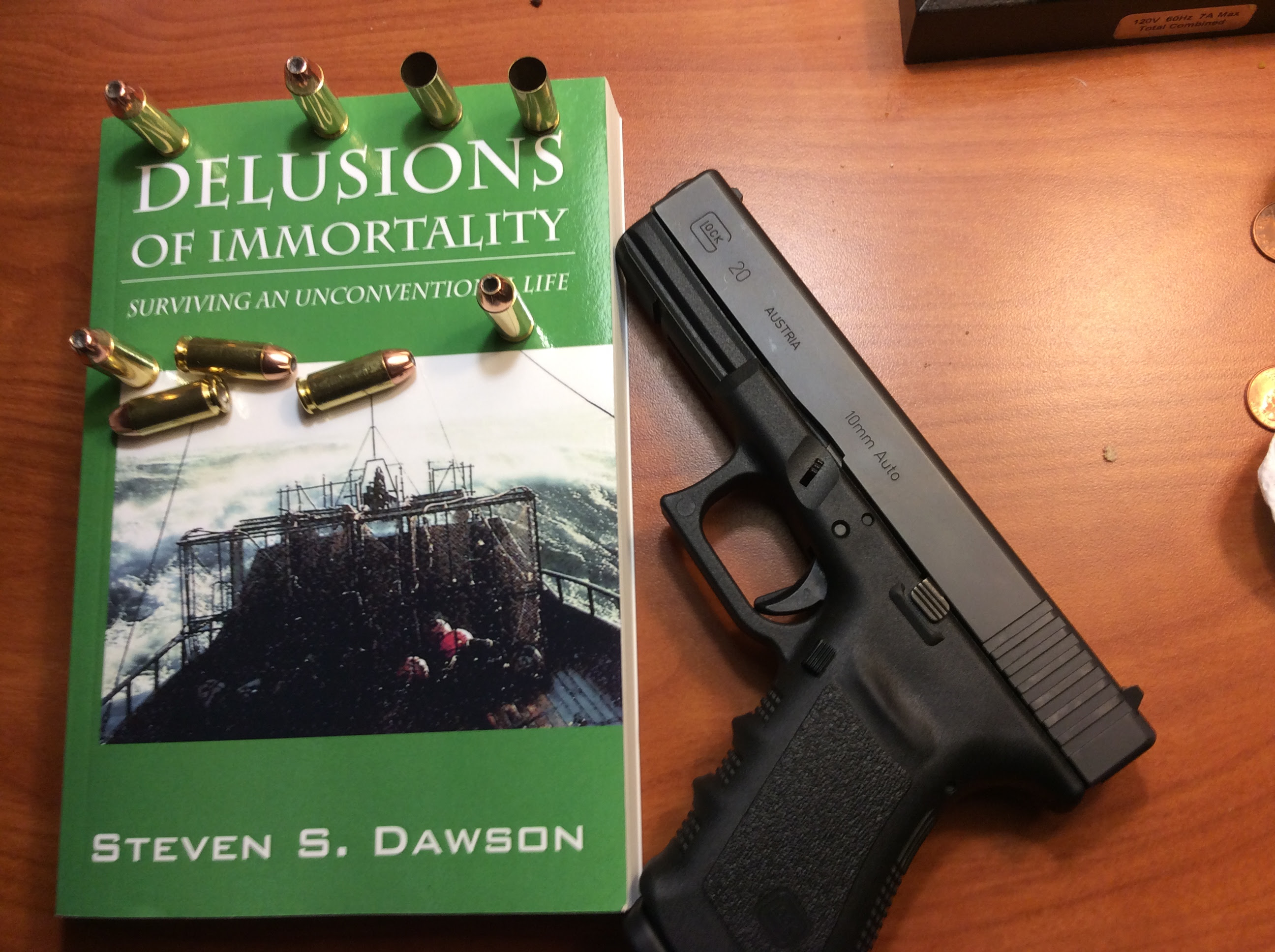 
I saw a moose out on the swamp, real early in the morning.

I heard something behind me, and it was padding up on me. I had a bear tag, but I wanted a moose first. I had just enough time to swing the rifle around. I yelled at it, and got a real aggressive response.  There were a lot of problem bears around, a bad berry year, a guy had gotten eaten by a bear.

The bear was so close that Kim could not use the scope on his .338 Winchester Magnum.  He sighted down the side of the barrel. Trophy hunters do not shoot bears in the head. It ruins the skull as a trophy, and makes the skull impossible to score for the record books. The bear was coming at him, but not full out.  It was only 15 feet away when he shot.  It went down as if he had scrambled its brains, but the bullet had gone through the muscle alongside the skull, just nicking the bone.  It knocked the bear out.  Kim thought it was dead.


All of a sudden I heard a growl, so I went back in there, obviously you can't leave a wounded bear around.   It was whirling in a circle, tearing out chunks of the tundra.

I stuck the barrel up against its neck, and the 250 grain .338 did not make it out the other side of its neck. 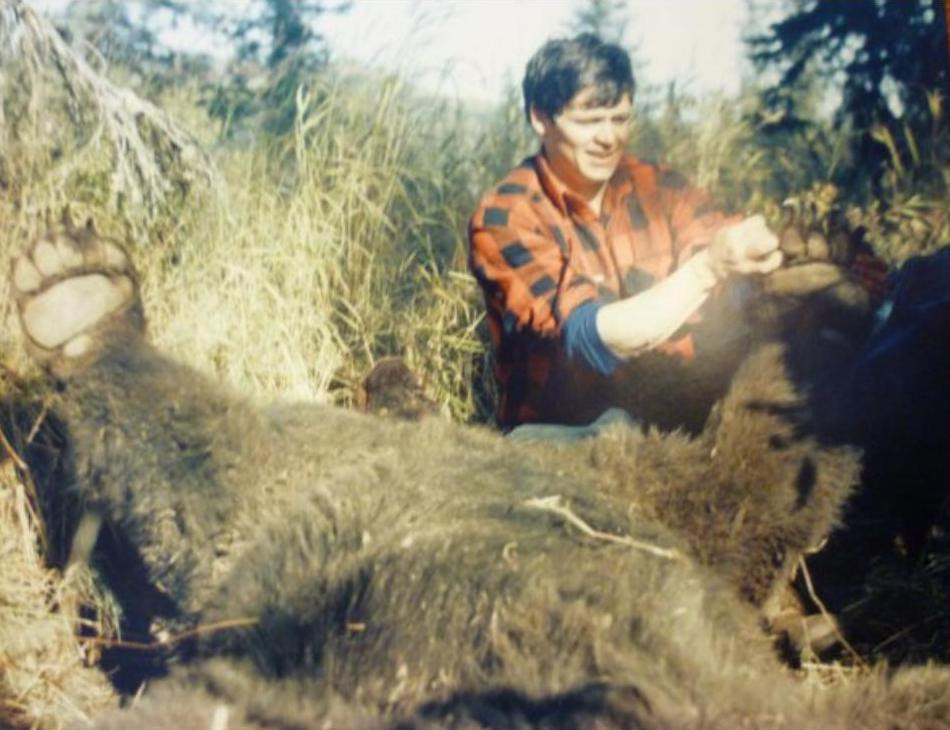 The bear Kim shot in 1992. Photo courtesy  Kim Woodman. It is a big bear, from the size of the front paws.

Kim said that he had learned lessons from the recent bear shooting. He is going to buy a holster or two.  He is consciously going to practice *not* backing up, and shooting rapidly.  He says that in a crisis, you act as you have trained to act.  He also said that when you are around bears a lot, familiarity can cause you to lose the healthy respect you should have.

Very few people have to kill two bears in self defense in their lifetime.  Kim does not view it as something to aim for.  It happened as part of the necessity of survival.

©2016 by Dean Weingarten: Permission to share is granted when this notice is included.
Link to Gun Watch

Spammers: You are wasting your time. Irrelevant comments will not be published